Spaces are limited. Book today and save!
DRAG
Latest

A New Zealand trip wouldn’t be complete without seeing Milford Sound. Located on the southwest of South Island, it is in Fiordland National Park. The 16-kilometre length from the head of the fiord to the open sea is lined with sheer rock faces that soar 1,200 metres high from the water. It is often called one of the most beautiful places on Earth. But there’s more to it than just an ethereal beauty, here are five amazing and interesting facts that you probably didn’t know about Milford Sound:

1. Milford Sound is not a sound

It’s actually a fiord. It was named so in recognition of its geographic features. This a large ocean inlet is a bit bigger than a bay and is flanked by sheer rock faces and majestic peaks. However, sounds are formed when a river valley is flooded with the sea, whereas Milford Sound carved out by erosion of ancient glacial ice.

2. It is one of the wettest places on Earth 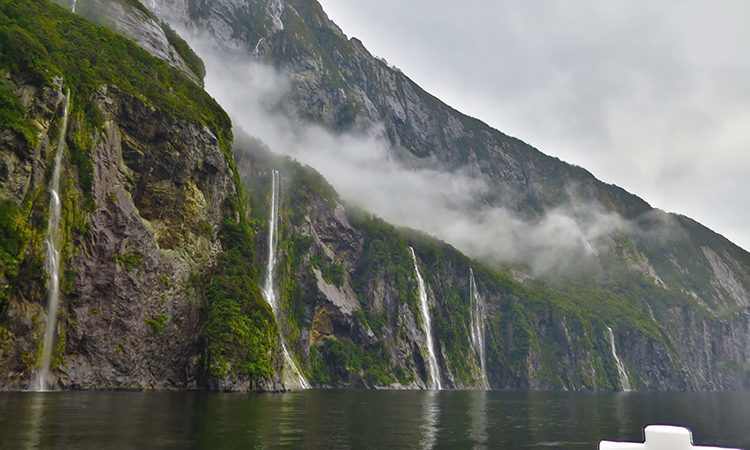 Milford Sound tops the rainfall meter of New Zealand. The annual rainfall is pegged at 6,813mm falling about 182 days of the year. The highest recorded rainfall on a single day is at 250mm. September, October, November and December are the wettest months in Milford Sound, with an average of 16 to 18 days of rainfall in a month. But don’t let that stop you from visiting! Milford Sound is even more magical when the rains come. It amplifies the already powerful waterfalls and creates hundreds of temporary ones which cascade down the cliff faces in a fury of power and beauty.

Being one of the most iconic scenes of New Zealand, it is also one of the most popular, clocking in close to 1 million visitors a year. Some buzz in through helicopters and scenic flights. About 14,000 people each year arrive by foot via the Milford Track. But most drive-through in cars or travel in the comfort of daily coaches from Queenstown or Te Anau.
There are many activities for visitors to enjoy while in Milford Sound. Cruising the fiord is always the most popular activity with the crowds. Southern Discoveries, Milford Sound’s oldest and most established tour company with 50+ years of experience, offer scenic and nature cruise options.
For those who love to learn or those travelling with kids in tow, may want to stop by New Zealand’s only floating underwater observatory, Milford Sound Underwater Observatory.

Not that you need a reason with the grandeur of nature all around. But you will be forced to stop looking at your smartphone for a minute and really enjoy your surroundings because there is no cellphone coverage and limited WiFi in the Fiordland.

5. The water is an inky black

The fiord is hundreds of meters deep, but that’s not the only thing giving it the dark appearance. It’s really a combination of darkened freshwater and seawater. During one of the many rainfalls that happen in the area, the water drains from the lush forests that surround Milford Sound and washes a tannin which stains the water the colour of strong tea. There are approximately 6 meters of freshwater that sit on top of the ocean water, which blocks out the light making it uniquely ideal for deep-sea life to thrive even in shallow waters.