Wildlife that can be seen on a Milford Sound cruise

What you can expect to see on a Milford Sound cruise

It’s no secret Milford Sound is one of the most beautiful places to visit in New Zealand. Within a quick glance, you’re welcomed with stunning scenery and a landscape unlike any other. However, if you look a little closer and take a little more time, there’s more than meets the eye lurking in the deep blue and surrounding greenery.

Milford Sound’s wildlife includes some very impressive and unique species. It’s home to a huge range of marine animals and many birds that are only found in New Zealand. Seeing the wildlife in Milford Sound is all part of the experience – and the best way to see them all is on a Milford Sound cruise.

Before we tell you about the best cruise to get up close to Milford’s wildlife, let us introduce you to some of the species that call Milford Sound home! 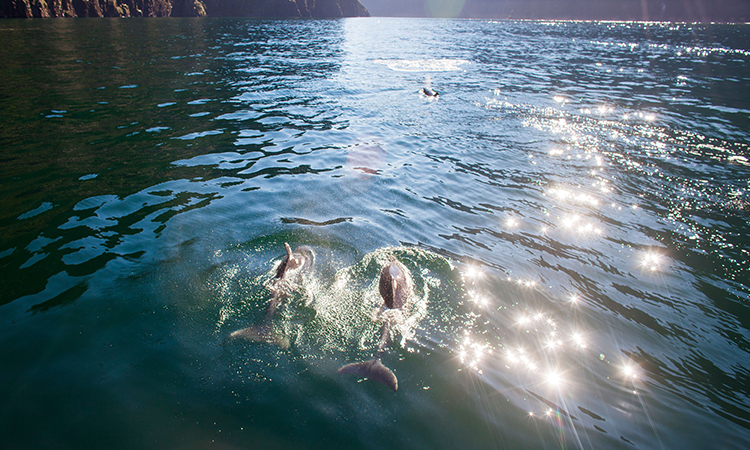 We’re yet to meet someone who doesn’t love dolphins. What’s not to love? Well in Milford Sound, you’re in for a real treat because beneath the surface two species of dolphins visit the fiord – the Bottlenose Dolphin and the dusky dolphin.

Out of the two, you’re most likely to see the bottlenose dolphin. These guys are regular visitors to Milford and also the most common dolphin in New Zealand in general.

Here are some interesting facts about bottlenose dolphins!

Bottlenose dolphins can grow up to three meters long and weigh a whopping 300 kilograms! They also can live for around 40 years. Bottlenose dolphins eat a variety of fish and use sonar or echolocation to hunt for them. The dolphins send out ultra soundwaves through the water which bounces off the fish – this tells the dolphins exactly how big and where the fish are. It’s pretty impressive!

There are more than 60 bottlenose dolphins that inhabit the area around Fiordland and the best place to see them is from one of our Milford Sound cruises as they ride the waves from our boats! Of course, if you go kayaking in Milford you may get closer than ever to these friendly and inquisitive animals. 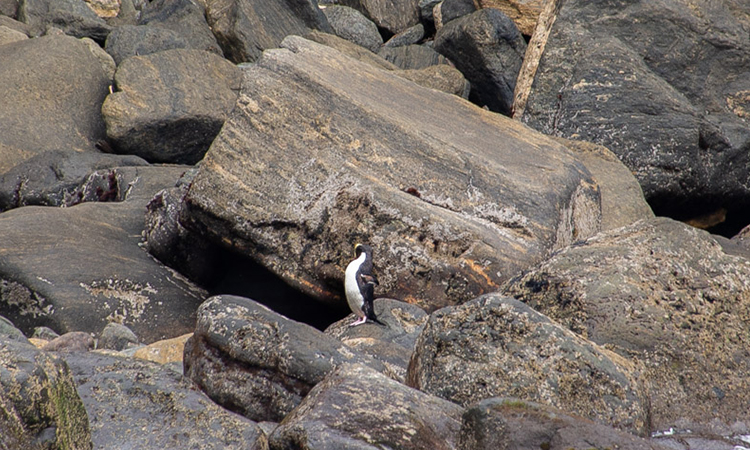 Many visitors are very surprised to find out that Milford sound is home to not one, but two species of penguin! They are the little blue penguin and the Fiordland crested penguin or ‘tawaki’.

Blue penguins are the most common species of penguin, but they can be hard to find. This is because they nest in burrows and spend most of their days hunting for fish below the surface of the water. To top it off, they are also the smallest penguin species in the world and their blue colouring gives them the ultimate camouflage!

Here are some interesting facts about the Fiordland crested penguin!

The Fiordland crested penguin, on the other hand, is one of the rarest penguins in the world, but during their breeding season between July and November, they can often be found nesting in the rocks of Milford Sound. These rare birds feed mostly on squid, fish, and krill; can weigh up to 4 kilograms and live for around 20 years.

Fiordland crested penguins are monogamous and often mate for life. Although the pairs separate when not breeding, females return each year to the same beach in search of their mate from the previous season. Females lay two white eggs by the end of August. The first egg is generally smaller than the second, and most first eggs fail to hatch, or the chicks die of starvation within ten days of hatching.

Fiordland crested penguins can’t raise more than one chick per season, and the first egg is thought to be an insurance policy in case the second egg does not survive. Chicks are brooded by the male, who goes without food for the first three weeks. The chicks are fed by both parents until they become independent and leave the colony in late November or early December. 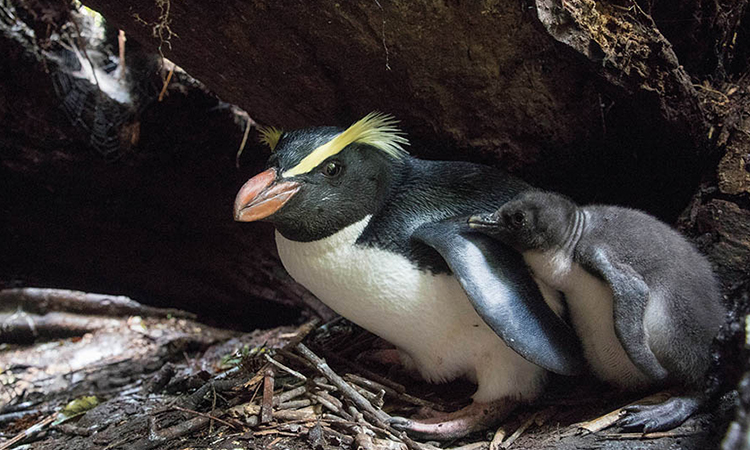 Despite being a protected species, the Fiordland crested penguin is considered vulnerable. It’s estimated that there are only between 1,000 and 2,500 nesting pairs left in the world.

Luckily, projects like the Tawaki Project are shedding some light on the species to help us better understand them and help the population grow. Initially, it was thought that there were only an estimated nine breeding pairs of these penguins in Milford Sound, but on further investigation, around 180 pairs were found! Milford has become one of the project’s key focus areas since this finding. The project is run by the Otago University but requires the help of others out in the field including our employees! Southern Discoveries supports the project by supplying researchers with food, accommodation, transport and the use of our small safety boat so they can access difficult to reach areas to complete research. 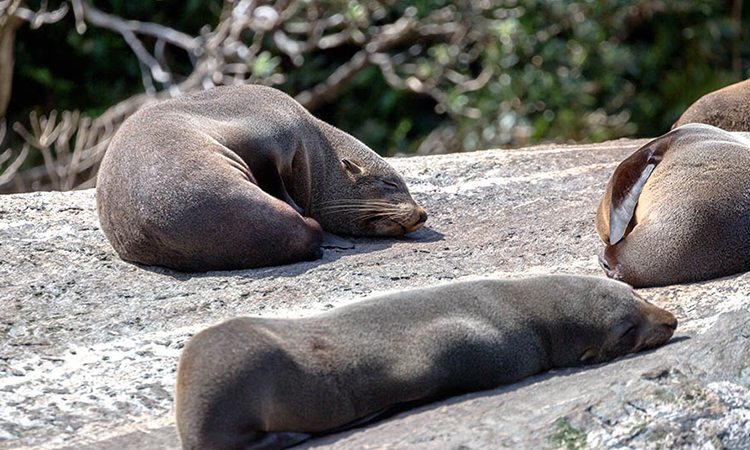 Seals are one of the most common marine animals to see aboard a Milford Sound cruise. New Zealand fur seals (also known as Antarctic fur seals) inhabit in the fiord all year round. In fact, there’s one place you’re almost guaranteed to see them and that is, as the name suggests, Seal Rock.

Seals often visit Seal Rock to sunbathe under the New Zealand sun and hide from predators in the water. New Zealand fur seals much more agile on land compared to other seals such as the weddell, crabeater and elephant seals.

Here are some interesting facts about the New Zealand fur seal

The New Zealand fur seal eats mostly fish and krill but will also eat small birds, which unfortunately includes the Fiordland crested penguin. Males live for around 15 years and females 25 years. Male New Zealand fur seals can reach 200kg (440lb) and can be up to four times larger than the females.

These seals were hunted almost to extinction in the early 1800s when their fur was sought by the fashion industry. Since then, these seals are protected and have made a great comeback – with a population estimate of 200,000 in 2001. Be sure to keep an eye out for them on your visit to Milford! 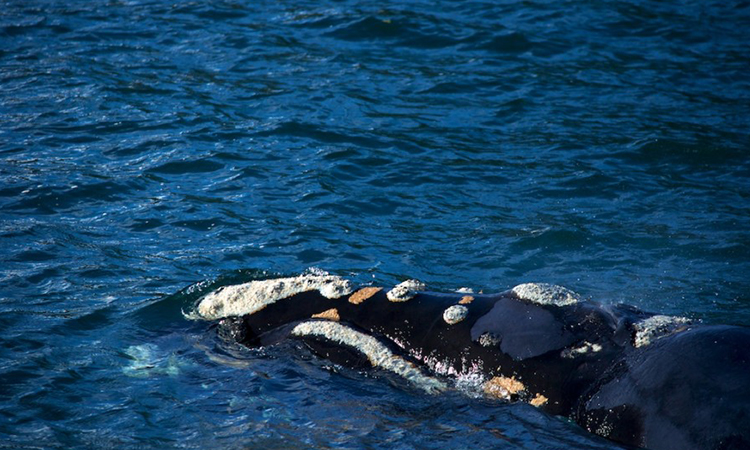 We don’t want to get you too excited, but on rare occasions, Milford Sound is visited by the southern right whale – the rarest of all large whales. They are usually seen around the mainland of New Zealand and appear to be part of the New Zealand sub-Antarctic population. But, sometimes we get lucky and these whales make an appearance in Milford!

Southern right whales can come very close to shore. Adults average 14-15 metres in size and newborn calves between 4.5-6 metres. They are mostly black in colour and can easily be identified by lack of a dorsal fin, a V-shaped blowhole spray, and white growth on their heads called callosities. 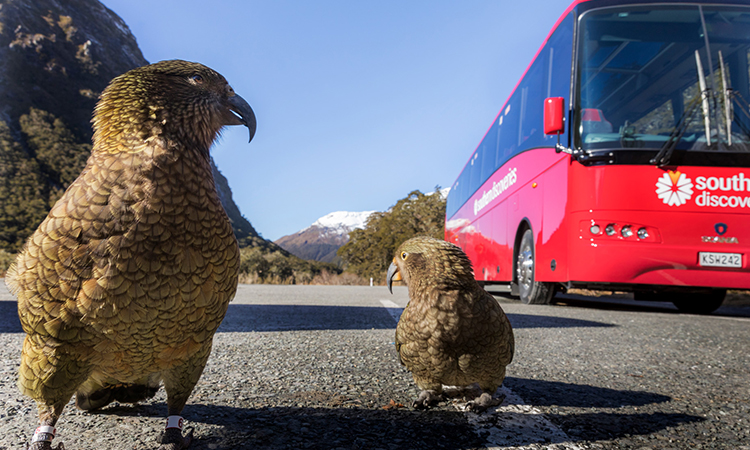 New Zealand is a bird haven and home to many unique species that only call New Zealand home.

One unique bird that you’re very likely to see on your trip to Milford is the kea. The kea is the only alpine parrot in the world and these guys are famous around Fiordland. They are known to be very friendly but also mischievous. You’ll want to watch your belongings around them because keas are known to sneak food from bags or backpacks, or even help themselves to anything they can find in campervans! You’ll often see keas flying high above you or even picking at cars in the Milford car park.

Another bird species that inhabits the area around Milford Sound is, of course, the Kiwi Bird. The kiwi is New Zealand’s national animal and there are five different kiwi species spread across New Zealand. These shy birds are nocturnal so it’s likely you won’t see them, but that doesn’t mean they’re not around. If you spend the night at Milford Lodge you might have luck spotting them after the sun goes down.

One of the rarest birds found in Milford Sound though is the whio or blue duck.

Unfortunately, the introduction of stoats, possums, and rats have caused a huge decline in their population. It’s not all bad news though and projects like the Sinbad Sanctuary Project are helping to ensure their survival.

At Southern Discoveries, we are the Sinbad Project’s principal sponsor. Since the project began the Blue Duck has seen a 500% increase in breeding pairs in the Sinbad Gully in Milford Sound! This project also hopes to introduce the kākāpō, the world’s rarest parrot, back onto the mainland of New Zealand. The Sinbad Gully was the last place these guys were found on the mainland and their return would be a truly special moment in Milford Sound conservation.

Our Encounter Nature Cruise is a great option for those who are dying to see Milford Sound’s unique wildlife. It’s our longest cruise and our onboard nature guides have a keen eye for spotting wildlife. It’s the ideal cruise for close up photos of seals, dolphins or penguins.

Our Nature Cruise is our most relaxing cruise in Milford Sound. On our journey around the fiord we’ll visit places like Seal Rock and give you an awesome opportunity to see the New Zealand fur seal from only meters away. On this cruise, we’ll also have a nature guide on board not only explaining more about Milord Sound but also keeping an eye out for any animals that decide to come and say hi!

If you’re interested in Milford Sound’s wildlife but also want to comfort of our largest vessel in Milford Sound, then our Scenic Cruise is the perfect option. Here you can sit back, relax, and choose to enjoy our buffet lunch or breakfast while keeping an eye out for Milord’s wildlife.

Make the most of your experience in Milford Sound and add a visit to the Milford Sound Underwater Observatory. Here, you’ll descend ten metres below the surface to see Milford Sound (and its wildlife) from a whole new angle.

From a kayak, Milford Sounds’ true size becomes even more clear. On our kayaking tours, we take you through Harrison Cove in search for some of the cleanest water in the world and also some unique wildlife!

In Milford, we’re the only company with a kayak lowering deck meaning you’ll be in your kayak before you’re in the water! It’s the safest and easiest way to get into a kayak and opens this activity up to the whole family!

Book your Milford Sound experience now and see if you can you spot Milford’s unique wildlife. Make sure to tag us on your social posts and use the hashtag #southerndiscoveries – we’ll be on the lookout for pictures of our fave Milford locals.