Everything you should know about Lake Wakatipu

Lake Wakatipu is Queenstown’s crown jewel. Upon arriving in Queenstown, you will undoubtedly notice the huge lake the town sits adjacent to. Back in the day, it was used as one of the main methods for transport, but today it is most famous for its size, beauty, and setting which leave visitors in awe.

There are a few things about Lake Wakatipu that you should know if you are visiting Queenstown, as it makes the lake all that more impressive! 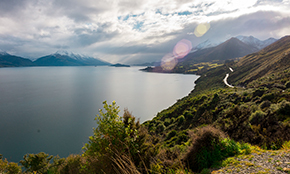 The first thing to know about Lake Wakatipu is that it is New Zealand’s longest lake at over 80 kilometres long. It is also New Zealand’s third-largest lake (after Lake Taupo and Lake Te Anau) at 291 km².

Lake Wakatipu is also so deep that it actually dips below sea level! The surface of the lake sits at 310m above sea level, but at its deepest point, the lake is 380 metres deep.

To put it simply, Lake Wakatipu is huge! And the people of Queenstown are thankful for this as it is the main source of freshwater for the town.

Lake Wakatipu was formed by glaciers more than 15,000 years ago. But, it wasn’t until August 1859 when the lake was first explored by a Scottish surveyor, Donald Hay. He spent several days exploring the lake by raft.

Queenstown was once called “Camptown” and was an important town during the gold rush in the 1800s. As it does today, Lake Wakatipu played an important role in both providing freshwater as well as transport. Before proper roads connected nearby towns such as Glenorchy, travel by boat on Lake Wakatipu was common.

While Lake Wakatipu has been helpful to humans living on the lake’s edge, it has also caused some problems such as flooding. There are five rivers that feed into the lake, and the only one that water exits from, making it easy for the lake level to rise. Several floods over the years have occurred with the most recent being in 1999 where the streets in central Queenstown were covered in water. Stores closed, people had to relocate, and the streets were covered in water for several days.

The Legend of the Lake

In short, the legend is about two star-crossed lovers, Matakauri and Manata. Manata gets kidnapped one night by a giant taniwha named Matau. Matakauri is able to save her and bring her back safely to the village. But, even after her safe return, Matakauri was worried that the giant would come back for her so he went out one night and burned a large ring around his sleeping body. Matau’s body went up in flames and burned a deep trough in the ground. The trough filled with rainwater and created what is known as Lake Wakatipu.

It is said that you can still see the giant’s heart beating with the rise and fall of the lake level.<

Read the Legend of the Lake story

No visit to Queenstown, or New Zealand for that matter, would be complete without exploring Lake Wakatipu. Luckily, today from Queenstown, there are several different ways to explore the lake suited for every type of traveller. 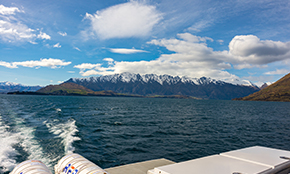 Spirit of Queenstown Scenic Cruise is an enjoyable way to check out Lake Wakatipu. From the top viewing deck, or inside the cabin below, you can see views of all of the surrounding mountains as the boat cruises along the lake. This is also a great way to learn some more about the lake as the commentary during the ride will give you lots more information! 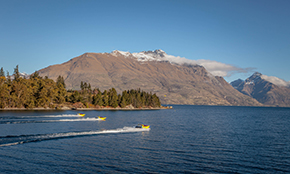 For those looking for a bit of adventure, a jet boat ride on Lake Wakatipu is a great option. KJet not only will take you speeding along Lake Wakatipu, but the high-speed boat will also take you on the connecting Kawarau River and up the Shotover River all the while doing 360-degree spins! 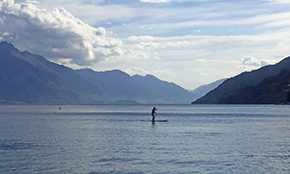 For a bit of exercise and to explore the lake freely, consider renting a paddleboard or kayak. You can rent these at the lakefront or from one of the various rental companies in town.